When she first started her career with Scheck, Geri Hlavac was using a ledger and writing the eight weekly paychecks by hand. She was hired as a temporary accountant in accounts payable, and quickly became a more permanent fixture with Rich Scheck and Kathy Dalmer, director of accounting and treasury, alongside just a handful of other employees.

Fast forward nearly 30 years, and Geri has left her legacy with Scheck. As the accounting manager, she has grown the department, improving everything from technology to processes to accounts receivable. Geri earned her associate’s degree while at Scheck, and introduced computers (an innovative concept at the time) along with an accounting software system to streamline the department’s work.

Geri also has some insight to share with new staff joining Scheck: “This is a great company to work for – very experienced, very fair people. They are all willing to listen to what you have say. This is a company that works as a team. When a project arises, everyone pitches in to work on that project. That’s our motto,” she explains. 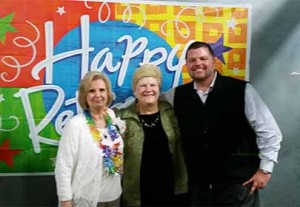 CEO Randy Peach recognizes the skillset Geri has brought to Scheck all these years. “It takes some time to prepare for someone to leave, especially one who has been with the company for such a long time. At the rate we are growing, there is an organic need to expand our department,” explains Randy Peach. “But Geri has left some big shoes to fill, and she will be missed greatly by our employees, partners and clients.”

“Geri leaves quite an imprint on this office. She is a class act and endeavored to please everyone. Anyone who needs assistance with anything goes to Geri first. If she can’t help, she knows who could and directs them accordingly,” Kathy explains. “We will all miss her very much; however, we wish her nothing but happiness and good health in her retirement.”

Upon her retirement, Geri intends to spend more time with her family in the south and west suburbs of Chicago. She also has big plans to visit Austria, Italy, and Australia, and is looking forward to taking an Alaskan cruise. “After 26 years, I will miss the people here and the friendships that have come about – inside the company and the auditors outside the company. And, of course, I will miss Mr. Scheck,” Geri says.